SHS Flavoured Alcoholic Beverages, but are they FAB(s)

Home / SHS Flavoured Alcoholic Beverages, but are they FAB(s)

Flavoured alcoholic beverages (FABs) is a relatively small segment of the market; however it still presents consumers with an interesting and alternative choice to the standard lager offerings. One market leading example is Carlsberg’s Desperado. Infusing a light mexican beer with their national drink – Tequila; with seemingly great success too.

This category has increased significantly in the past year with a 75% increase in sales bringing the current value up to £12 million. SHS Drinks are now jumping on the bandwagon, and have launched two new spirit-flavoured beer brands – Cuvana and Dead Crow.

Instead of creating “me-too’s” to rival Desperado, they have introduced new accent flavours to the category. Cuvana offers a light refreshing Latin American beer combined with the tang of Caribbean rum and lime, taking design cues from both the former and the latter.
While Dead Crow draws its inspiration from the ‘deep south’ by adding the areas most celebrated spirit, bourbon whisky. The rich tones compliment the refreshing beer flavour to create an aromatic aroma, and the name echo’s a quirky ‘deep south’ personality. 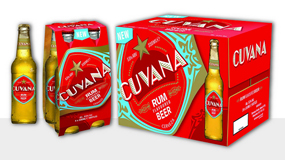